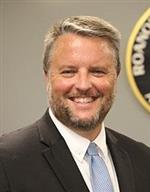 Dr. Ken Nicely first joined Roanoke County Public Schools in 1993 as a teacher at Cave Spring High School.  In 2002, he was named an assistant principal at Hidden Valley Middle School and became principal at HVMS in 2006.  Dr. Nicely moved to central office in 2012 as the Director of Secondary Instruction & Technology and became the Director of Administration in 2016. In Spring 2018, Dr. Nicely became Assistant Superintendent of Administration and then, on August 9, 2018, the School Board named Dr. Nicely as superintendent following the retirement of his predecessor.

Dr. Nicely led the development of the C-Change Framework which now serves as the comprehensive vision for Roanoke County Public Schools and has been endorsed by the School Board. At the heart of the C-Change Framework is "deeper learning": learning that is engaging and purposeful. The RCPS Profile of a Graduate further describes the RCPS commitment to prepare students to be Opportunity Ready.

“When I began my teaching career in Roanoke County Public Schools 26 years ago, I would never have dreamed that I would eventually become  superintendent. Roanoke County is one of the top school systems in Virginia, and I am humbled, honored, and deeply grateful to have the opportunity to lead this school division forward as we seek to make the C-Change Framework the consistent experience of every student, in every school, and every classroom."

Dr. Nicely serves on the local boards for Virginia Western Community College and United Way of Roanoke Valley. He has served as president of Virginia Middle School Association, vice chairman of the Virginia School Consortium for Learning, and trustee for the international Association for Middle Level Education. He is the recipient of the 2019 VASCD Leadership Award, the 2012 Ted Sizer Dissertation Award from NASSP, and 2001 Virginia Excellence in K-12 Teaching Award from the Foreign Language Association of Virginia. He and his wife are the proud parents of three children who have attended Roanoke County Public Schools.